Dolly Parton’s Stampede is a fantastic show and family feast that’s considered one of the most fun places to eat in the Smokies! This Smoky Mountain dinner show is a friendly competition that features 32 horses that perform dazzling stunts, spectacular special effects and masterful musical productions! The show also includes an aerial performance featuring an original song written and recorded by Dolly! Guests are served a mouth-watering, four-course feast of the Stampede’s Own Original Creamy Vegetable Soup, a Hot Homemade Biscuit, a Tender Whole Rotisserie Chicken, a Hickory Smoked Barbeque Pork Loin, Buttery Corn on the Cob, an Herb Basted Potato, a Hot Flaky Apple Turnover, and unlimited Coca-Cola, tea or coffee. Pirates face off in battles on land, on deck, in water and high above full-sized pirate ships in a 15-foot deep indoor hideaway lagoon in Pirates Voyage! Captain Blackbeard and his quartermaster, Calico Jack, lead the Crimson and Sapphire crews into a contentious battle. Pirates, magical mermaids, tropical birds, dock-diving dogs and a “salty” sea lion all take the stage and wow guests with their talents! At this Smoky Mountain dinner show, you’re served a four-course pirate feast that includes a Buccaneer Biscuit, Voyager Creamy Vegetable Soup, Cracklin’ Pan-Fried Chicken, Sugar-Cured Ham, Corn on the Cob, an Herb-Basted Potato, a Walk the Plank Peach Turnover and unlimited Coca-Cola, tea, or coffee.

At Hatfield & McCoy Dinner Feud, the Hatfield and McCoy families jump on stage to resolve their differences that began in the 1800s! The two families go back and forth in a series of competitions, such as singing, dancing, playing instruments, clogging and stunts. A billycopter high-flying machine takes flight as the sheriff tries to keep tabs on the two families, and a 24-foot swimming hole in the center of the stage becomes a playground for diving hillbillies and diving dogs! While you watch, enjoy an all-you-can-eat Southern feast of Feudin’ Fried Chick’n, Open Pit Pulled-to-Pieces Pork Barbeque, Southern Style Creamy Soup, Smashed Mashed Taters, Buttery Corn on the Cob, Ma’s Hot Homemade Bread, Daisy’s Blue Ribbon Coleslaw and Granny’s Famous Specialty Dessert! Great Smoky Mountain Murder Mystery offers three different comedy murder mystery Smoky Mountain dinner shows that rotate throughout the week! “Moonshine Murders” follows the Lukes as they deal their family moonshine recipe to a potential buyer on the same night as Boss Boar is having his Bi-Weekly Boss Boar Celebrity Concert featuring Elvis! “Who Shot the Sheriff!” follows Sheriff Dill Dillon for a night of singing, shooting and slaying in a Wild West musical comedy! “Marriage Can Be Murder” involves murder, mayhem and marriage on the day of Michael and Lisa’s wedding! These shows come with a three-course meal that includes: broccoli and cheese, vegetable and loaded potato soups, country fried chicken with white pepper gravy, pulled pork, homemade mashed potatoes, country style green beans, a dinner roll, plus desserts like raspberry, chocolate or caramel cheesecake.

Now that you’re all set with at least one activity to enjoy on your trip, you might be ready to start planning the rest of your vacation! Take a look at these rooms at our downtown Gatlinburg hotel and consider staying in luxury on your trip! 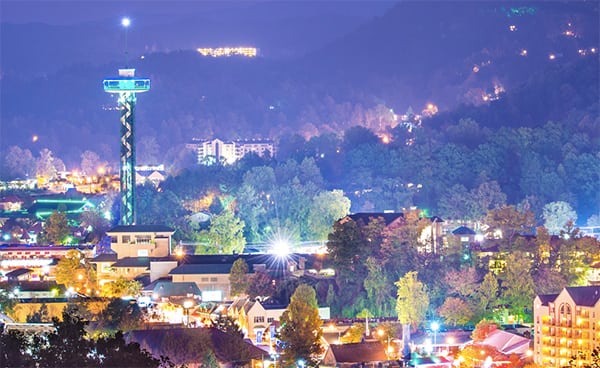